A History of the Solventless Dab From the Guy Who Pioneered It,…

Does Your Cannabis Business Qualify for Trademark Protection? The Answer is Most…

What Are Full-Spectrum CBD Extracts and Why Are They Important?

Cannabis Compound Could Be Weapon in Fight Against Superbugs

Pot Brothers at Law school tip of the day

How to Increase Harvests Per Year… But Mainly An Autoflower Update

INSANE GIANT BLUNT WITH THE BOYS!

Las Vegas is a lively resort city regularly visited for its 24-hour casinos and endless barrage of around-the-clock entertainment. But on Dec. 10, 2019, Sin City will transform, at least for one night, into Sensimilla City.

That’s because the Cannabis Business Awards (CBA Globes), an esteemed awards ceremony celebrating cannabis industry leaders, will be popping off at the Hakkasan Nightclub in Las Vegas during MZBizCon, the world’s premier marijuana business trade show. The event will honor dozens of businesses, brands, activists, growers, and organizations that have helped shape the expansive cannabis and hemp industry.

Founded by Chloe Villano, this renowned gala of ganja is now entering its eighth year, and the upcoming ceremony in Las Vegas is poised to be the biggest and brightest yet. As a matter of fact, the upcoming CBA Globe Awards 2019 will be the organization’s first-ever international show, not only acknowledging cannabis leaders in North America, but across the entire world.

As one of the first and most successful cannabis consultants in all of Colorado, Villano initially started the Cannabis Business Awards in 2012 as a way to pay homage to the trailblazers and pioneers who were on the forefront of a newly established industry. Since then, the event has evolved into one of the marquee ceremonies and networking events for cannabis leaders, and is regularly hosted in places like Miami, New York, Denver, California, and now, Las Vegas. 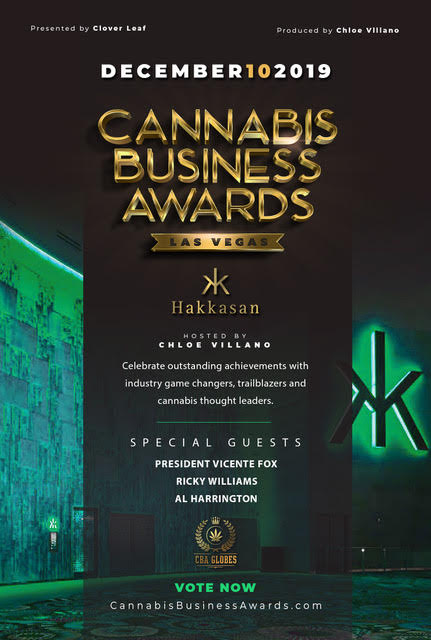 “There are a lot of celebrities and athletes who are a part of it,” Villano told MERRY JANE. “We’ve honored some of the most amazing people who have stood up and told the truth, and lived the truth, and had really been the leaders and pioneers of this industry.”

There will be over 30 awards presented during this year’s Cannabis Business Awards in Las Vegas, each of which celebrates a particular aspect of the cannabis industry, culture, or movement. Categories include Most Influential Individual, the “Hope Award, Business Executive of the Year, Best Flower, Best Extract, Most Innovative Company, the Cultivation Achievement Award, and so on.

One unique aspect of the Cannabis Business Awards is the nomination and voting process, which is strictly decided on by people like you. This event is no place for backroom deals or self-aggrandizing honors. The award winners are solely selected by you and other like-minded cannabis consumers.

“I think that’s what makes it so special, the people get to vote on what they like and believe,” Villano explained. “It’s not just the industry or company choosing who the best is, it’s the people who choose.”

And guess what! The voting period for all 30 awards is currently open – so you can choose the winners right now! You can cast a vote for one nominee in each category, just be sure to do so before voting ends at midnight on Dec. 6, 2019.

Browsing through the extensive list of nominees, you’ll be sure to come across celebrities, activists, companies, and brands that have positively impacted your personal interaction with the cannabis plant, from famous individuals like Snoop Dogg and Seth Rogan, to some of the world’s most renowned extractors, cultivators, and edible producers.

As for what attendees can expect at the actual event, Villano describes the Cannabis Business Awards as both a holiday party and red carpet event. The ceremony will feature industry pioneers from different backgrounds who are dressed to the nines, all of whom will be openly sharing their personal experience with both the cannabis plant and the ever-changing industry.

“You can expect a full house of cannabis industry experts and top business executives, investors from all over the world,” Villano said. “You’re going to see some of the most amazing talent in the room in the industry as far growers, extract artists, even big business executives and business owners.”

What celebrities and athletes can you expect to be in attendance at the upcoming Las Vegas event? According to Villano, hosts and presenters at the upcoming ceremony will include Heisman Trophy Winner Ricky Williams and former NBA star Al Harrington, as well as the former President of Mexico Vicente Fox, who will be honored with a Lifetime Achievement Award for his role in promoting legalization in his home country.

“I’m very honored to give someone [Vicente Fox] who has worked so long fighting cartels and drug prohibition, and have someone of his caliber there, which is a very important thing,” Villano said. “To honor him with a Lifetime Achievement Award is going to be unforgettable.”

Tickets to the CBA Globe Awards 2019 are available for purchase online, but will not be sold at the door. If you’re interested in attending, you can purchase tickets here. The event itself will begin at 7PM, while the award ceremony will take place from 8PM to 11PM.

This article was made in collaboration with the Cannabis Business Awards.

The Most Discussed Topics On Tinder In 2019

7 Gourmet Weed Recipes to Get Your Dinner Guests Lifted

How Quickly Does Cannabis Enter Your System, and How Long Does It Stay There?

Why Marijuana Could Be Legal in Florida as Soon as 2020

Three Ways Cannabis Brands Can Improve Their Visibility in the Media

A History of the Solventless Dab From the Guy Who Pioneered It,...

Does Your Cannabis Business Qualify for Trademark Protection? The Answer is Most...