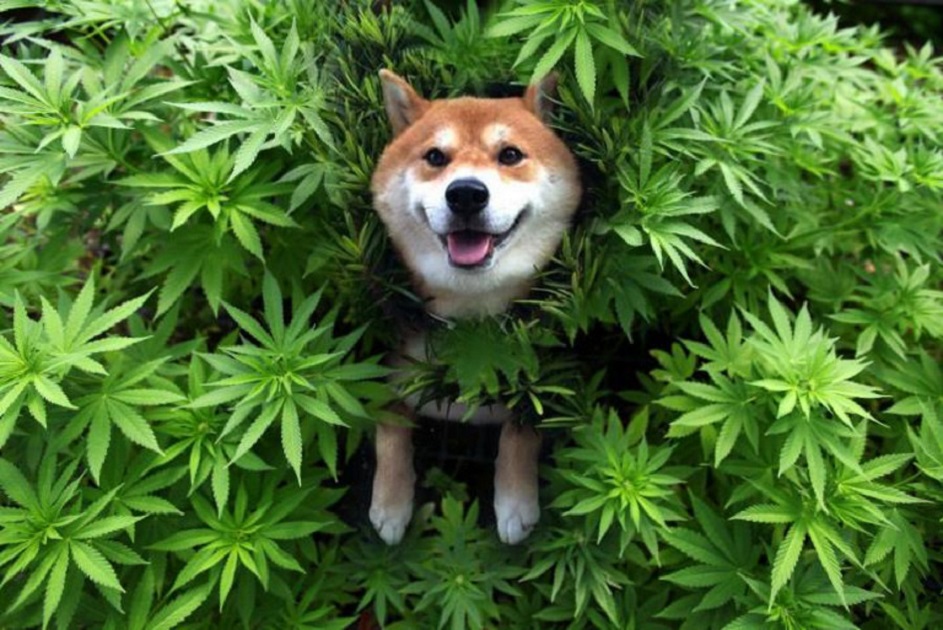 Have dogs? Then you know both how much joy they can bring to a home, and also how expensive it can be to keep a dog healthy. Research shows that owning a dog is good for your health. And common sense says that a healthy dog is better for your health than a sick dog. And, as we all know, it’s better for your financial health, as well. Let’s face it. Veterinarians and pet medications are not cheap.

According to the ASPCA, dog owners spend more than $1,000 on their pets in the first year alone. And financial planning website MoneyUnder30.com recommends that dog owners set aside as much as $2,000 for emergency medical expenses. Common sense says that anything we can do to cut down ownership expenses down while keeping our pets healthy is a good investment in our own health and happiness.

Pain, as we all well know, can slow us down quite a bit. It can also trigger depression. These, in turn, can result in a reduction in physical activity which can then further affect health both in the short- and long-term. In particular reduced activity can result in poor circulatory health which can have serious consequences and shorten a dog’s lifespan.

One of the fastest growing trends in dietary supplements aimed at keeping our pups healthy is CBD oil for dogs. Is it just a passing fad, or can CBD oil really benefit your dog’s health and save you money at the vet?

For those few of our readers who are not yet aware, CBD oil is a product which is similar to cannabis oil but rather than being derived from marijuana and being rich in THC (the compound in marijuana that causes the buzz), CBD oil is made from hemp and is rich in a cannabinoid called cannabidiol, or CBD, which does not cause a high. Both THC and CBD are considered cannabinoids. More specifically, they are considered phytocannabinoids — or cannabinoids produced in plants.

We spoke with the experts at MediPets CBD to find out how CBD oil for dogs can help to keep your pet healthy and save you money on healthcare costs. According to MediPets, mammals such as humans and dogs naturally produce compounds known as endocannabinoids — or cannabinoids produced within the body.

“Endocannabinoids are extremely important to our health. In fact, it’s the job of the endocannabinoid system to keep our bodies in balance,” says MediPets, “When your brain determines that particular systems within your body have become unbalanced, it produces these endocannabinoids which help regulate a wide variety of physiological activities at a cellular level. Some of the systems within the human and canine body which rely on cannabinoids in order to function properly include the immune system, our circulatory system, kidney and liver function, sleep cycles, hormone production, neurotransmitter production, and much more.”

“Furthermore,” MediPets tells us, “an imbalance of cannabinoids can result in increased susceptibility to disease including cancer, sleep disorders, poor metabolism, lack of energy, mood disorders such as anxiety and depression, digestive disorders, skin disorders, and on, and on. Well, as it turns out, human and canine bodies alike have coevolved with cannabinoid-producing plants such as cannabis, and phytocannabinoids are just as important to our health as endocannabinoids. Have you ever wondered why cannabis can be used to treat such a wide variety of conditions from anxiety to cancer? Well, now you know. Cannabinoids are among the most important compounds in our bodies.”

We spoke to MediPets at length to learn more about the many benefits that CBD oil can provide for your furry friend. Let’s listen into the conversation.

How does CBD help to reduce anxiety in dogs?

Dogs are known to suffer from anxiety issues just like humans. A number of issues can trigger anxiety in dogs. For instance, some dogs suffer from separation anxiety when left alone. Some dogs become anxious as a result of loud noises such as fireworks. Dogs can also suffer from phobias just like humans. Interestingly, it’s not the separation, loud noises, and other scary things that cause anxiety. Many dogs handle these issues without getting anxious. The root of the problems stems from an imbalance of neurotransmitters such as cannabinoids. One of the functions of cannabinoids is to help balance the production of neurotransmitters such as serotonin and dopamine which are known to play a role in reducing activity in regions of the brain that are associated with anxiety and fear. Supplementing your dog’s diet with phytocannabinoids such as those found in CBD oil has been shown to raise levels of these hormones and thereby reduce anxiety.

Does CBD also help with depression?

Anxiety and depression are very similar in that they both result from an imbalance of neurotransmitters and hormones. In much the same way that cannabinoids help regulate activity in those regions of the brain involved in anxiety, they also help to regulate brain activities related to the reward centers in our brains. Humans and dogs that suffer from depression are generally found to have low levels of serotonin and dopamine. Supplementing your dog’s diet with CBD oil could help bring your dog’s reward systems back into balance and reduce depression in the same way it helps with anxiety.

How does CBD help reduce pain?

Cannabinoids such as CBD are believed to help reduce pain in two ways. First, they help to balance immune response to injury and infection and act as an anti-inflammatory. Inflammation can cause swelling and pain. Reducing inflammation can reduce the pain. Second, cannabinoids are also known to be involved in the regulation of pain signals. Damaged nerves can result in a type of pain known as neuropathic pain. Activities in areas of the brain related to pain are known to be modulated by cannabinoids. The cannabinoids in CBD oil might help to both reduce inflammation and tame an unruly nervous system.

Numerous studies have shown that CBD has antibiotic, antiviral, and antifungal properties. Because of its chemical structure, CBD can attach itself to viruses, germs, and fungi spores rendering them harmless of killing them outright. Studies have also shown that cannabinoids such as CBD have the ability to help regulate the immune system. A depressed immune system can make your dog more susceptible to infections of all kinds.

What about allergies? Can CBD help with allergies?

Allergy symptoms are generally the result of a compound called histamine which is produced naturally by our bodies. The purpose of histamine is to help our bodies fight off foreign particles such as pollen or toxins such as those produced by insect bites such as from fleas. Often times this system can become overactive and result in increased inflammation, mucus production, sneezing, coughing, itching, rashes, and other symptoms. CBD oil has been shown to help to tame this histamine response which would reduce all of these symptoms.

We’ve heard that CBD helps strengthen bones in humans. Is it the same in dogs?

Studies have shown that CBD can help to slow the progression of conditions such as osteoporosis which can make bones brittle. Brittle bones can make dogs more susceptible to fractures and breaks. Not only that, CBD has been shown in studies to help speed up the recovery time from broken bones and surgical procedures.

How about arthritis? Dogs can get arthritis, correct?

Oh, sure. It’s a huge problem for aging dogs. In addition to CBD oil possibly helping to reduce the pain and inflammation associated with arthritis, it helps to modulate the immune system and tame autoimmune responses. Arthritis is an autoimmune condition. It’s the result of the immune system mistakenly attacking our own tissues. In the case of arthritis, the immune system attacks the connective tissues in joints. Once this connective tissue becomes damaged it cannot be repaired, the pain becomes chronic and gets worse and worse over time. CBD oil might help to slow the progression of arthritis in dogs and reduce inflammation and pain.

A lot of digestive disorders are caused by autoimmune response mentioned earlier. The immune system mistakenly attacks tissues in the intestines causing inflammation, ulcers, and pain. Many researchers suspect that conditions such as Crohn’s disease and irritable bowel syndrome might be the result of a cannabinoid deficiency. Activities of the intestines such as motility — the intestinal contractions which push the food through the system — are controlled by the brain and mediated by neurotransmitters such as cannabinoids. The same goes for nausea and vomiting response. CBD oil can help to tame these autoimmune responses, reduce inflammation, and improve motility. And many pet owners say that CBD oil also reduces nausea and vomiting in their pets.

Is it true that CBD kills cancer?

Cancer and also benign tumors are the result of damage to DNA. DNA provides the instructions for how and when cells divide. Damaged DNA can cause cells to reproduce too rapidly resulting in tumors. It can also cause other damage to cells such as switching off numerous functions which are designed to stop the replication of unhealthy cells. CBD has been shown in the lab to induce a process known as apoptosis in certain cancer cells by essentially instructing them to stop functioning altogether. This is a natural process which helps to rid our bodies of unhealthy and damaged cells. CBD oil might help to kill damaged cells before they can reproduce, as well to slow and even reverse the progression of cancer. More clinical research needs to be done on this, but the lab results are quite promising and there is a lot of anecdotal evidence to support this as well.

What about skin conditions?

So what’s your advice for dog owners when it comes to CBD?

First of all, don’t give your dog CBD products made for humans. Dogs require far less cannabinoids to stay healthy, especially smaller dogs. Our products are specifically formulated for dogs and cats.

Also, it’s important to point out that you’re not just doing this for your dog. By supplementing your dog’s diet with CBD oil, you might increase your pet’s health and happiness. You also increase the enjoyment that you get from having a dog. Studies show that dog owners have lower incidences of conditions like high blood pressure and anxiety.

All of these conditions that we’ve discussed can cause your dog’s health to enter a downward spiral by either causing a reduction in activity or an increase in conditions such as anxiety, depression, and lethargy. This can in turn reduce your dog’s quality of life and shorten its lifespan. Treatment for many of these conditions can end up costing dog owners a fortune.

Many thanks to MediPets for their time and expertise. MediPets offers a full line of CBD oil for dogs, CBD pet sprays, and CBD treats for both dogs and cats. Visit them online at MedipetsCBD.com.

The Mature Stoner: Why Are So Many Seniors Smoking Weed?

The Teen Vaping Dilemma Explored – Is it Big Tobacco 2.0?

Aurora Cannabis Replaces CEO, Sees Up to $1B in Write-Downs

Fit in My 40s: The Cannabis-Aided Workout