Making the case for smoking cannabis in front of your children 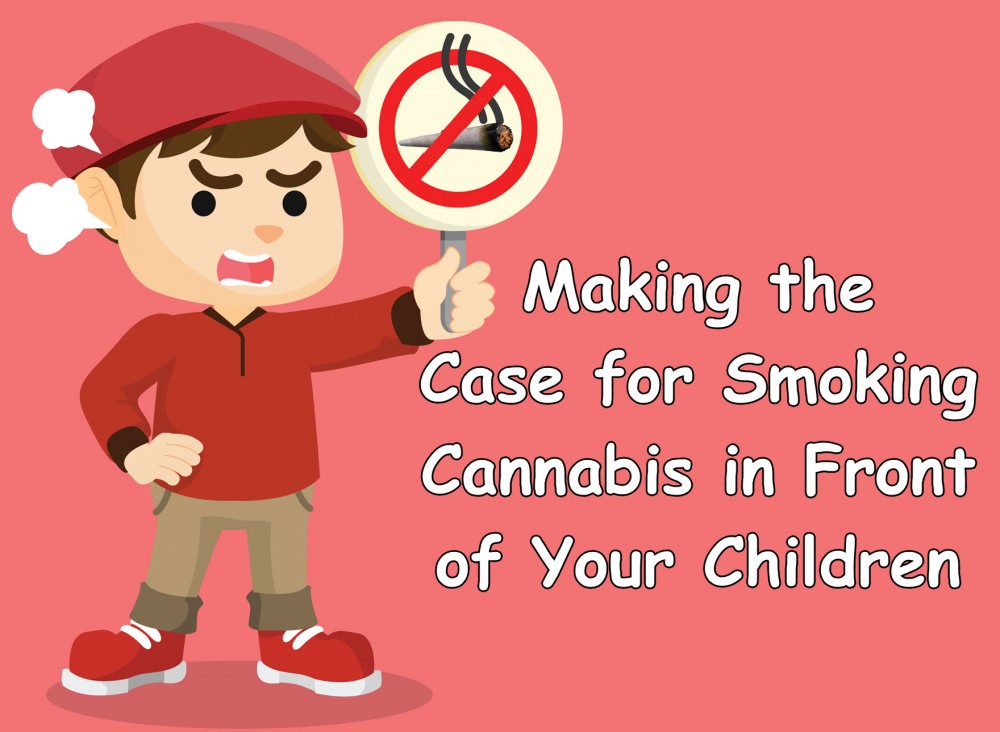 Smoke weed in front of children? HOW DARE YOU! What blasphemous nonsense are you trying to peddle to me now Reg?

Well – today I’m making the case as to ‘why parents should smoke cannabis in front of their children’. Everybody knows that cannabis legalization – at this point in time – is an unstoppable force and that within the next few years, it will become legal on a global scale.

We know that as a result, more people will begin to consume cannabis on the regular. We also can see that casual cannabis consumption has already bled into the mainstream narrative. It is seen as “normal” in T.V shows, songs, and even on certain news stations – it’s “just marijuana” now.

Our past approach to “educating the kids” on the ills of drug use has empirically failed to achieve its goal and only serves to distort the reality of substance use.

For example, we can take a look at the latest “Public Health Campaign” by the Michigan Department of Health and Human Services. The Campaign entitled, “Future Self” shows us a young cannabis user [presumably a teenager] smoking weed in the basement. Suddenly, an overweight “loser” persona appears next to him explaining that ‘he is his future self’. “This is what happens if you don’t quit smoking weed”.

The old “stoner-stereotype” – thought to have gone extinct in the early 2000s – resurfaced again and showed its fat-stoner-tits as a warning to the kids that “smoking weed is bad….mmkay!”

Apparently, there were up to six different “Future Self” clips, which mysteriously disappeared from the Michigan Department of Health Youtube Account according to Michigan Live. Now, it’s been reduced to a mere 30-sec clip of old’ Fat-Tits-McBlazed.

This campaign went live at the tail end of 2019 and expects to garner upwards of 14 million views to “educate the youth about the dangers of consuming cannabis”.

Here’s a direct statement from the Michigan Department of Health and Human Services;

“The Michigan Department of Health and Human Services launched a campaign about the well-documented harmful effects of youth use of marijuana in December 2019. It is directed at ages 14-21 and is slated to run on social media, popular online video, and audio channels and video streaming services.

An article in the American Medical Association states that those who used cannabis heavily in their teens and continued through adulthood showed a significant drop in IQ between the ages of 13 and 38; an average of eight points for those who met criteria for cannabis dependence.

The campaign, Future Self, paints the picture of a youth’s possible life when they become adults if they are using marijuana during their formative years. This age group was identified as being vulnerable to health risks associated with marijuana use. The recent legalization of adult-use marijuana can create the perception for adolescents that it doesn’t pose risks, however, the risks of marijuana use are much higher for youth than adults as their brains are still developing.”

So what do we know for sure?

There are a couple of things we can now infer based on the data we’re looking at. For starters, the Michigan Department of Health and Human Services think, “Cannabis users are fat-slobs with no future” as depicted by “Future Self”.

Secondly, the entire campaign is based on an “Article in the American Medical Association” on a study claiming that there is a “reduction in IQ” if someone consumes cannabis at an early age. However, this study is highly contested and the variables to accurately measure the impact on one’s intellectual coefficient are so complex, that to claim, “Marijuana resulted in a drop of IQ” is just bad science.

Finally, they believe that utilizing “unscientific scare tactics” is the best way to prevent kids from consuming drugs – in this particular case, marijuana.

What will ACTUALLY WORK!

I do not think that kids should smoke weed recreationally. I’m all for the medical application of cannabis for the youth. If you can give kids painkillers, you can give them weed.

However, when it comes to recreational consumption – I would even go as far as to argue that people should be careful of their consumption habits until the age of 25. Sure, I’ll get a lot of hate from everyone under the age of 25 – however, this is the age where your endocannabinoid system finally matures. It makes sense to allow it to do so without artificial cannabinoid intake to potentially alter it biologically.

Of course – I have no scientific bases to make these claims, however, if I was the state department, these would be the things I’d be looking into.

In the meanwhile, the best way to educate kids about consuming drugs is to provide them with “models of consumption”. In other words, kids learn from their parents and not the State.

If a child sees his or her parents consume cannabis responsibly, they will adopt that “reference of consumption”. Once they become aware of cannabis consumption, parents should have “the talk” with their kids and explain to them that smoking weed is something “adults do” just like drinking a beer, driving a car and virtually everything else that kids can’t do.

It’s simply – making a distinction between an “adult activity” and a “child activity”. For example, every year during the Super Bowl, millions of adults shamelessly drink booze in front of their kids. They expect the kids to understand that “this is for grown-ups” and “kids shouldn’t do it”. Of course, some kids will end up raiding their parent’s liquor cabinets – but a large portion of them will receive the message.

Honesty is the best approach when it comes to people and drugs. We have tried to lie our way out of the risks of drug consumption, only to drive more people towards drugs. Perhaps, it’s time to stop hiding your cannabis consumption and to show your children the “model way of consuming cannabis”.

Show them the responsible approach to recreational weed and make the distinction between “adult” and “child” activities.

Just like you do with a million other things – and the kids seem to understand that concept quite well.

CANNABIS IN FRONT OF KIDS, WHAT? READ MORE…

SHOULD PARENTS USE CANNABIS IN FRONT OF KIDS?

CAN YOU BE A GOOD PARENT AND STILL SMOKE MARIJUANA?

Why Aurora Cannabis Hasn’t Signed a Deal With a U.S. Giant Like Other Pot Companies

Inside the London Company on the Cutting Edge of Cannabis Science