Most interesting and curious cannabis strains

Throughout the history of marijuana, breeders have strived to find the best possible specimens of each strain in order to get hold of the highest quality plants, refine their lineages, and obtain new hybrids that are as solid as impressive. But the truth is that Mother Nature is unpredictable and sometimes she surprises and delights us with some unique and out of the ordinary plants, which stand out for their morphology or ability to adapt, developing very different traits to what we commonly consider as marijuana.

Botanical inquisitiveness has led some breeders who have encountered these “mutant strains” to investigate whether they possess interesting features that could be used in cannabis breeding, thus popularizing these hybrids’ peculiarities, pros, and cons.

One of the most popular unusual strains is Dr. Grinspoon, a pure heirloom Sativa which stands out for its vigorous, stringy and slender growth, reaching considerable heights even with a short vegetative period.

This super Sativa produces very airy buds with thin and separated calyxes that look like a weird bud that never compacted, developing independent and far from each other, in the shape of small, hairy, and resinous turrets. This is a very unusual trait, for the plant hardly resembles a cannabis specimen until one smells some of its aromatic “buds”, which will reveal the true nature of this singular plant. 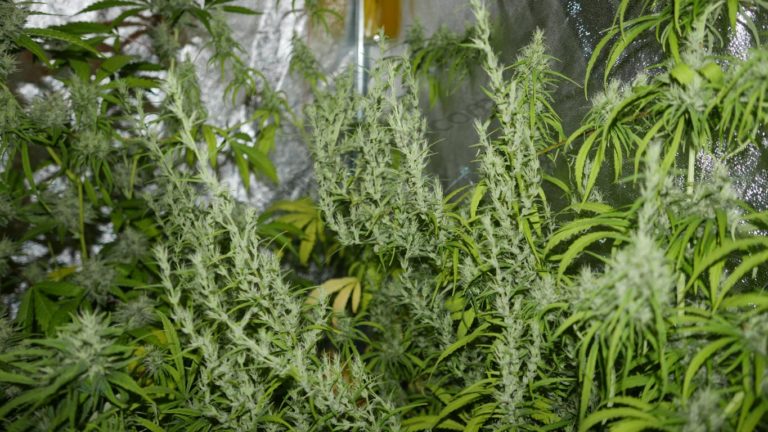 As already stated, at first glance it may not look like a marijuana plant, resembling a hairy bush or some type of stringy vine rather than the usual plants found in our gardens.

Even so, her strange appearance, long flowering period (95 days), and modest productivity are compensated by the strong psychedelic and uplifting high, on a par with the best Sativas, very similar to that of Haze strains…a long-lasting, stimulating effect that sends you straight to the stars after only a few puffs. Highly recommended to improve low mood and for all types of creative and even physical activities… there’s nothing like a nice Dr. Grinspoon joint for some hiking!

Ducksfoot originates from Australia and has a rare mutation that makes it develop furled, webbed leaves with attached leaflets, instead of separated and spear-like ones. These leaves really look like a duck’s foot, as if the leaflets were interdigital membranes.

This is due to a recessive gene usually found in Sativa-dominant strains; so if you ever come across a phenotype with this particular gene, you can keep it and do some breeding, as actually did the original creator of the strain, Wally Duck. The cross of a DucksFoot with an ordinary strain will result in about 25% of the offspring with this rare trait.

This unique aspect and the fact that its scent is milder than most strains, makes it go unnoticed more easily, hiding among other plants without drawing attention. It is then an ideal strain for guerrilla and discreet balcony growing.

Ducksfoot is an unusual specimen in every sense since the aroma is a mixture of pepper and incense notes which resembles an aromatic plant rather than a commercial cannabis strain. Last but not least, it must be said that it has a wonderful, relaxing effect. 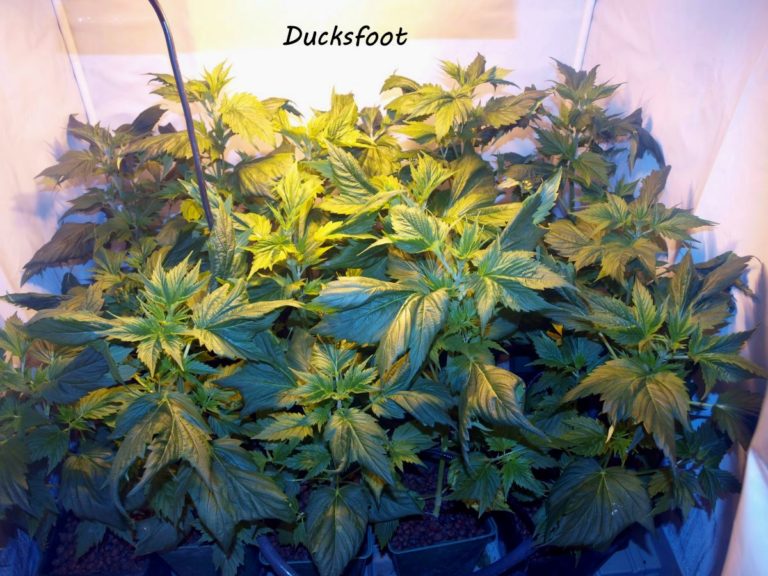 Frisian Duck, a hybrid of Ducksfoot

Frisian Duck, a Frisian Dew (Super Skunk x Purple Star) x Ducksfoot hybrid, was created so people could enjoy the legendary Ducksfoot. Frisian Dew is a hybrid especially created for outdoor growers with high resistance to cold and pests, inherited from the Ducksfoot parent. As you can see in the picture, it also develops beautiful purple buds with awesome scent.

Frisian Duck also inherits the Ducksfoot’s webbed leaves, which makes it even more discreet; it’s an ideal strain for low-profile gardening and guerrilla growing, also for inexperienced growers who wish to learn the basics without neighbours and visits noticing about it. 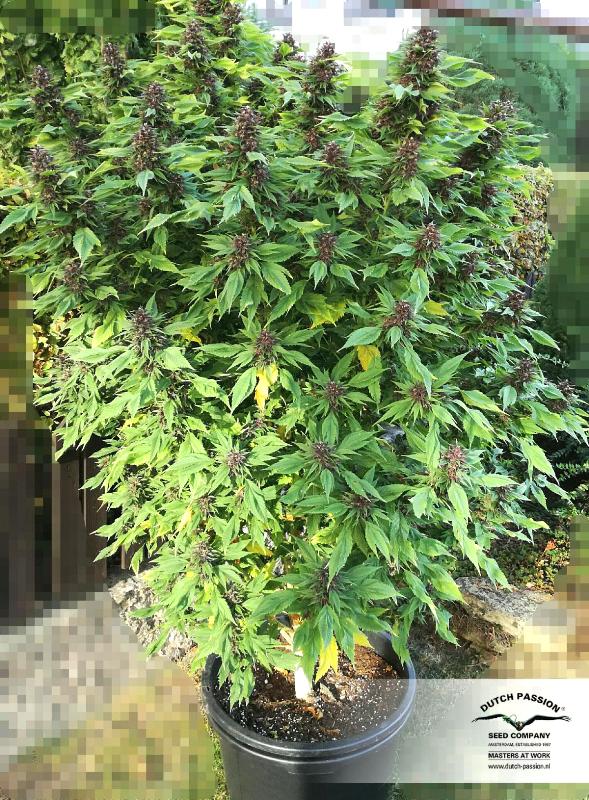 Cannabis Australis is a phenotype discovered in Australia in the 70’s that stands out for its weird morphology, which as you can see resembles cannabis Sativa.

Some argue that it is an Australian landrace strain derived from the first cannabis sativa introduced into the area, due to its huge genetic differences, but the truth is that there is no conclusive evidence to support this; it could also be an extravagant mutation of an unusual strain which has remained stable over time. 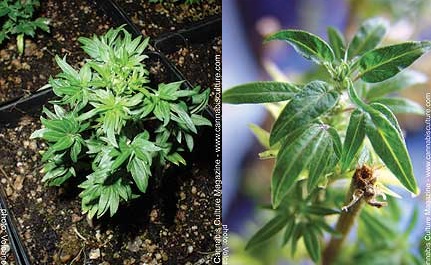 ABC plants grow as a bushy shrub with small, crowded and glossy leaves of smooth edges and a maximum length of 5cm, grouped in small clusters of chaotic appearance. 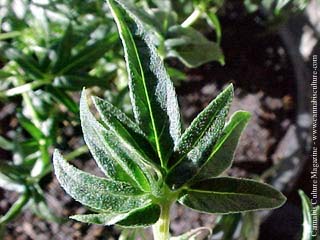 In fact, this structure (and its citrus and spicy aroma, distinctively Sativa) is very similar to that of Dr Grinspoon, previously seen, and even to that of a hop, a cannabis relative, making it quite clear that it’s a strain like no other.

This unusual structure ensures a high resistance to cold and moulds, as well as total discretion, which is the reason why some breeders have tried to cross it with other strains in order to enhance its cannabinoid levels (its average THC content is around 5%) and thus make it more attractive for the commercial market.

But no stable hybrid has been developed yet, due to the fact that the gene responsible for this trait is recessive and it is not easily found in the offspring, which makes it a very difficult characteristic to fix.

Also back in the 70’s, cannabis breeder Tom Hill launched a new strain for the Californian cannabis market, Deep Chunk, a pure Indica landrace from Afghanistan, which quickly gained recognition for its impressive traits.

It grows strong and robust, developing thick and resistant stems, and it’s ready after a relatively short flowering period, offering medium yields of buds packed with trichomes. The high is intense, relaxing, fun, and long-lasting. The size and thickness of its leaves are awesome, which is one of this strain’s main characteristics taking into account its pure Indica genetic background. 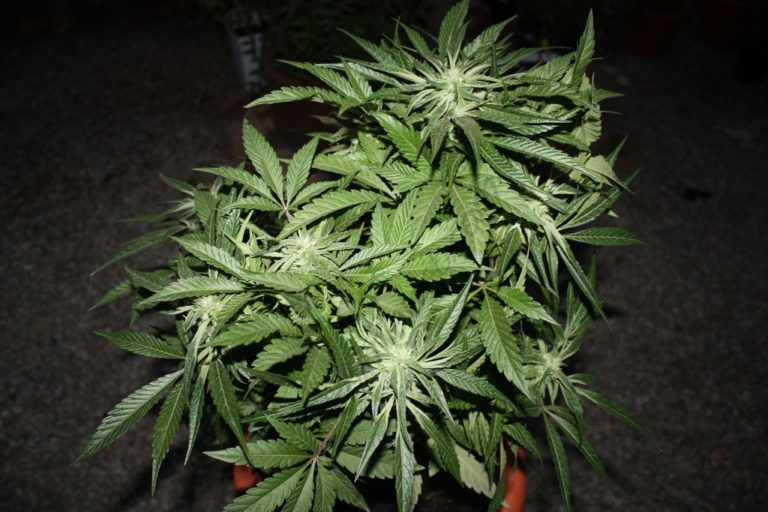 For these reasons – because it transmits its best traits, compact structure, and chocolate, citrus and coffee aroma with earthy and leathery notes – Deep Chunk is highly appreciated by growers who love traditional and high-quality strains. The bad news is that you’ll have to get it in the form of clones or seeds produced by other breeders, since the original Deep Chunk is no longer available in the market.

Without a doubt, these are some of the most interesting and weird strains that the cannabis world have to offer, but you can bet Mother Nature will surprise us with other mysterious strains in the future.

‘Growing Outside is a Dream’: Asparagus Makes Way for Cannabis in Canada’s Fields

Is It Possible to Overdose on CBD?

Common errors in the cultivation of automatic plants