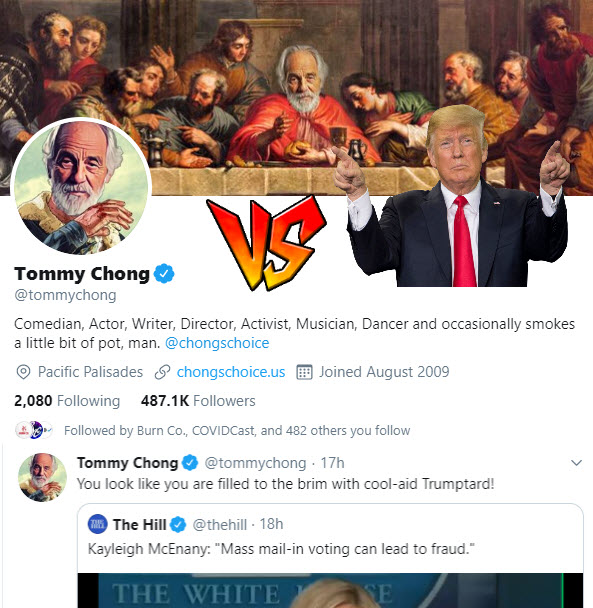 Tommy Chong and Cannabis are virtually synonymous. Some people esteem Chong as the “Pope of Dope”, “King of Kief” and essentially the epitome of stoner. With a long line of pro-cannabis movies, anti-establishment themes and humor that makes fun of the inadequacies of the government – this is the “Classic Chong” we all came to love and esteem as Stoner Royalty.

However – lately, I’ve been quite perplexed by Tommy Chong’s Twitter Account to such a degree that it prompted me to write this article. For those who are not aware of what I’m talking about – I’m glad to be the one to breach this subject with you. If someone kidnapped Tommy Chong – we’ve got to do something about it!

Born one year after prohibition “officially started” in the United States. Despite being Canadian by birth – Mr. Chong would impact the U.S counter culture along with his friend Cheech Marin, with a series of “stoner movies” entitled “Cheech & Chong’s ‘Fill-in-the-blank’”. With 7 Cheech and Chong titles and a slew of guest appearances and B-movies down the line – Chong rose to infamy as a cannabis icon.

In 2003 – Chong received even more street-cred after being arrested and named as “head honcho #1” in a federal sting named insultingly named – “operation pipe dreams”. Did Chong get arrested for drugs? Nope!

The federal government decided to use millions of dollars to arrest Mr. Tommy Chong for the dangerous activity of “selling glass bongs”. Even more disturbingly – he wasn’t even selling the bongs. His son was running an online store and essentially, they shipped a bong into a state where it was illegal to buy or sell “paraphernalia”.

Essentially using Chong’s family as collateral – the federal government forced him to plead guilty which in their books – made Operation Pipe Dreams a raging success in their eyes.

Who also found it particularly amazing was none other than Senator Joe Biden who used the momentum of Operation Pipe Dreams to attached a piece of legislation known as “The RAVE Act” to a law enacting a national warning system about child abductions. RAVE stands for “Reducing Americans’ Vulnerability to Ecstasy.”

“Under the new law, it is illegal to “manage or control any place… for the purpose of unlawfully manufacturing, storing, distributing, or using a controlled substance.” That loose definition allows federal agents essentially unfettered discretion in busting up any party where there could be drugs–and not just ecstasy. For example, if your neighbor complains about a loud dinner party you host this weekend, and you and your buddies happen to be toking a joint, under the new law, you could be interpreted as hosting a “rave” and could face multiple years in federal prison. In an odd Footloose twist to this Draconian law, the probability that you have violated the RAVE Act increases dramatically if your dinner guests have rolled up the living room rug and are dancing.” – SOURCE

This is important for a few reasons. Here’s a direct quite from Biden himself;

“If I were governor of my state or the mayor of my town, I would be passing new ordinances relating to stiff criminal penalties for anyone who holds a rave, the promoter, the guy who owns the building, I would put the son of a gun in jail, I would change the law.” – JOE BIDEN

Who is Tommy Chong today?

While I cannot speak for ‘who Tommy Chong is’ as a person – I can gather information about him on his Social Media presence. We’ll be specifically looking at his Twitter account to reference his latest tweets. You can check it out here : Tommy Chong’s Twitter Account

Before I continue – I’d like to note that to gather the following screenshots took me no longer than 5-minutes. This is because as I was writing this article – Tommy Chong was on a rant about…well, take a look for yourself.

This is a legitimate concern – I have written an article showcasing the numerous accounts where Joe Biden is “whispering sweet nothings” into the ears of underage girls – people with obvious “get-the-fuck-away-from-me” expressions plastered on their faces. Don’t believe me – see for yourself. This doesn’t mean he’s guilty of anything – I’m just pointing out that if Trump was doing the exact same behavior than Biden – Tommy would throw a bitch fit.

People legitimately did not like Hillary Clinton for many reasons OTHER than the “Russian Job”. She’s tied to numerous scandals including mishandling disaster relief funds in Haiti – erased emails, supporter of Big Banks and War, her and her husband’s connection to Epstein and a slew of other things. The fact that they bullied Sanders out as a nominee – same strategy used with Biden. No, Tommy – it’s not a simplistic “the baddies did it” – people are far more nuanced than this apparent “single tone” you’re singing lately.

Remember what Biden said though Tommy – right after the federal government went after your family and forced you to go to jail for bullshit laws. Remember your nine-months in prison? You don’t elect someone president because “he was a vice president to Obama” – you look at his FUCKING POLICIES! Like him expanding the War on Drugs, inflating federalist powers and being responsible for locking up millions of minorities as a result of his policies. His RAVE Act – gave the DEA carte-blanche to seize properties if someone did ecstasy on it…I mean really Tommy? You’re going to sit there and defend that piece of shit just because he has one black friend? 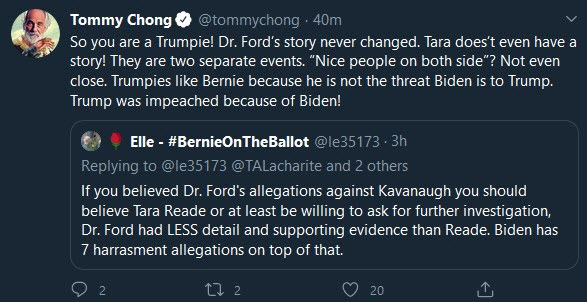 Discrediting Bernie Sanders and promoting your own candidate and calling anyone who disagrees with you a Trumpie – is not engaging in civil discourse. Hell – that’s the type of shit Trump would say. It seems that you are sounding more like the object of your hate every day…Tommy Trump?

And once more – no, Elle is not a Trumpie – she is just honest about how disconnected the democratic party is to the ideals they claim to stand for. Hillary and Biden are establishment quo-types. They bail out big banks and screw the common-folk, they expand federalist powers at the expense of the masses – they are NOT your friends.

Well – you should be worried about Biden. If I were to serve you a choice of two plates – one with a sloppy piece of shit and one with a firmer piece of shit – which one would you choose to eat?

The answer? NEITHER! That’s the Tommy – both options are shit. Four more years of Trump is as irrelevant as four years of Biden. These are not the leaders we need – they are not the leaders we choose, they are establishment cucks who are being forced down our throats and we’re supposed to simply drop our pants and take it from behind with a smile on our faces? Fuck Trump AND Fuck Biden! Remember who you are – the counter-culture icon that stood against “The Man” not the one sucking on Biden’s sagging nutsack.

Tommy Chong just lost his shit and no longer is the Tommy Chong we imagine in our heads but rather a sold out federalist who supports the very people that put him in prison and threatened his family.

Some staffer of Tommy – a hardcore Biden fan – is in charge of the account and is sitting there shitting on Tommy’s fans with politically-driven and anger-fueled bullshit.

What are your theories about Tommy Chong? Why the he lose his shit? Will he ever “chill out man?” ever again?

I hope so – he’s an icon of the community – but, if he ends off being a hypocrite for siding with seasoned drug warriors – I don’t know if he’s worthy of that status anymore.

IS KILLING CHEECH AND CHONG NECESSARY FOR LEGALIZATION? 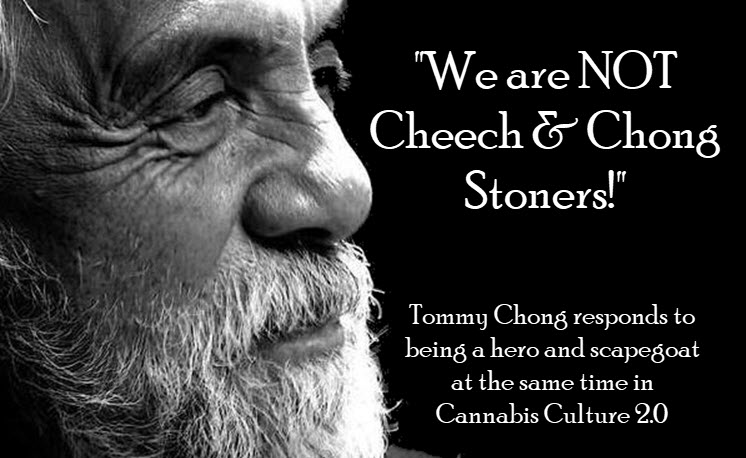 TOMMY CHONG TALKS TO CANNABIS.NET ABOUT OUR ARTICLE!

3 Women Shares Their Thoughts on Cannabis and Motherhood

How to Properly Use Cannabis to Quit Smoking Tobacco

Yes, Virginia, Your Cannabis Business Can Get Insurance–and From Top Carriers

What Is Hemp and How Is It Different From Marijuana?