Will the Legendary 420 be canceled this year? 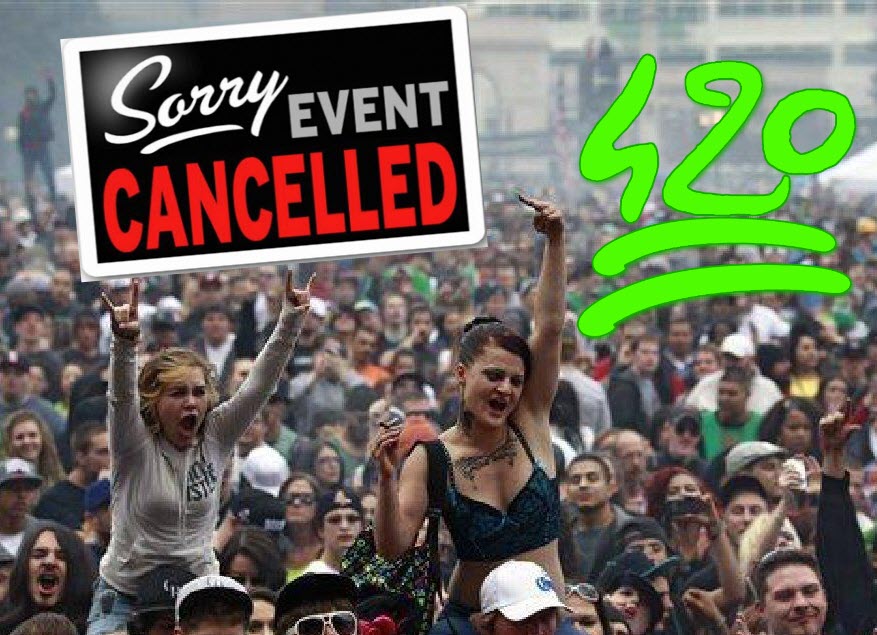 We’ve been seeing the memes circulate the internet for the better part of three years. It goes something like “At 4:20 on 4/20 of 2020 there will be four twenties”. Other memes like, “When you realize that it will be 420 all April in 2020” and so forth.

The point being that 420 in 2020 was supposed to be a big deal – and then we slipped and fell into an alternative dimension where “the future as we know it” died and now we’re living in some weird Black Mirror episode.

We know that Denver’s annual 420 event was canceled due to the Corona Virus along with a slew of other ones. I don’t have the time or patience to go through every 420-event on the planet – so it will be the duty of each “Shmoker” to do their own localized research on whether or not the 420-event you were planning on going to is cancelled.

In all likeliness – it probably is.

Is there a shot that it might not be canceled?

I feel you – keeping shit positive…that’s the spirit! The problem is that it doesn’t seem that all the positive thinking in the world will change the way things are developing. And how are things developing globally?

Depending on your news source – you might be getting conflicting data. Some people are claiming that it’s the end of the world while others are screaming “shadow-government-conspiracies”. The World Health Organization are putting out conferences daily on what’s happening all around the world – however, local governments also are providing information on the matter.

And between all of the sources – conflicting data. Let’s not forget that politicians are handling this situation worse than a chimpanzee trying to explain advanced neuroscience to a rock – it’s just not happening.

The major problem we’re facing is that there are too many conflicting narratives. Nobody has a clear answer on anything and politicians – for fear of not getting re-elected – are going above and beyond to “SHUT IT DOWN!”

People are dispensing anti-bacterial sprays and wipes – DURING A VIRAL INFECTION. I’ll let that sink in for a second or two.

Is this reaction too much or too little? I wouldn’t know how to even begin to address that question. Any rational person who is also honest would simply say, “There’s not enough data”. However – most people wish they were rational and are notorious liars – so we get the opposite – a bunch of opinionated and emotionally charged nonsense.

Then – because we have the ability to live stream our thoughts and fears and literally project them onto other people – we do just that. We put our concerns, and worries, re-posting unverified “news articles” which are in all likeliness a “re-print of a re-print” re-written and mixed with our own uniquely anxious filters of reality. This act of giving isn’t one way either. When you gift your digitally-packaged anxiety to your network of friends – they give it back and it spreads.

This makes the politicians take notice and as a result – they begin to make decisions based on fear as opposed to sound-scientific data. The next thing you know – people are bum-rushing Costco for toilet paper and…anti-bacterial for viral infections…yep…reptile brains!

The initial speculations for quarantine was 90-days. However, can you imagine the panic that would ensue if they were to say “NOBODY DOES ANYTHING FOR THE NEXT 3 MONTHS!” There would be riots on the street. People wouldn’t so peacefully return to their homes. They would charge political offices – they would raid and loot and the entire illusionary system of security would go up in smoke.

Thus – the initial 21-day quarantine is eased into the macro-mind of humanity – and then, it will be extended. And extended…and extended until we’ve either reached the 90-day marker or people lose their shit

Nonetheless – it is very uncertain and currently it looks like we’re probably going to 420 like our stoner-forefathers and mothers – in the obscurity of their own homes.

Can we do something about it?

I say – if shit is going to get hairy – we don’t need to NOT have 420. After all, the entire month of April is 420 and the world is essentially being forced to be “stoners” – locked up in their homes, eating food and watching T.V.

However – perhaps we could all celebrate together…digitally? It’s not too uncommon for people to sit together and have “watch parties” so why not do a “digital smoke sesh” with you and your stoner friends. I’m sure there will be many celebrities and cannabis brands that will do the same.

Even though a virus might have cock-blocked one of the most epic 420s – perhaps in the history of 420s ever – it doesn’t mean that we can’t have MORE PEOPLE participate than ever before.

Perhaps – on 420 on 420 of 2020 – we can all simply post a picture of us passing a lit joint as our Profile Picture – to show our stoner family out there that they are not smoking alone. We’re all in this – as one global family together.

Or maybe all of this blows over and we can go smoke like always – but then again…maybe not.

HOW TO CELEBRATE 4/2O LIKE AN ADULT, SOME IDEAS HERE…

‘Cannabis Beauty’ Is Becoming a Real Category as Sephora, Others Promote CBD-Infused Products

What is Cannabis Purging and How Do You Make Purge Cycles?

How Cannabis is Making Baby Boomers Feel Young but How Does it Help Their Aging Bodies?